Banner Grabbing and Emailing via Telnet

Telnet is a old network protocol which has been around longer then the internet. It was created for the purpose of remote access for network resources. It sends its data in plain text and is therefore highly insecure. Nowadays it has largely been replaced by the encrypted Secure Shell (SSH). Telnet can however be a useful tool for debugging purposes.

Other protocols which were developed in the early days of the Internet is also quite insecure, because their details is send in plain text as well. Known protocols such as HTTP, FTP, SMTP all does this. This does also mean that there is nothing stopping you from using Telnet to communicate via these protocols. It might be impractical – but in a debugging situation, it is nice to be able to fire up telnet and, for instance, check if you mail server is responding correctly.

This tutorial will show how to do Banner Grabbing and how use telnet to send an email via the SNMP Protocol. Since the default telnet client in Windows has been disabled since Windows Vista, the first thing you got do is enable it.

Note that when using Windows Telnet client there is no cursor caret, so you will not be able to see what you are typing. Furthermore, you needed to execute your command by hitting the Enter key twice. This tutorial can also be done with software such as Putty, which is a little easier to navigate.

1. Open a command prompt and type the following commands one by one followed by pressing Enter 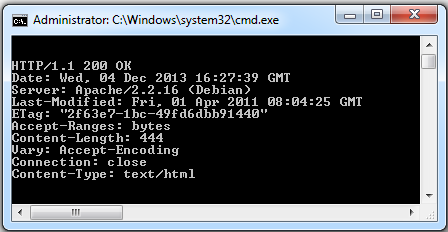 What we did was telnet to the server, which hosts ifconfig.dk on port 80. Then send a HEAD request to get a HTTP header from the server. Here we can see it is running Apache 2.2.16 on a Debian OS. For the fun of it, let’s try requesting the site itself.

2. Type the following commands one by one followed by pressing Enter

Again we telnet to the server hosting ifconfig.dk on port 80. But this time we use the GET command, also we define that it’s the host ifconfig.dk we are requesting. I spared you for a bunch of HTML, but it is there.

First we need to find the name of the mail server. This can be done with the tool nslookup.

1. Open a command prompt and type the following commands one by one followed by pressing Enter

2. Type the following commands one by one followed by pressing Enter 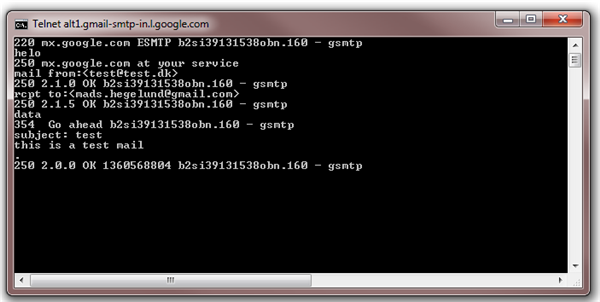